From the early settlement located at the point where the River Lagan met the Rivers Farset and Blackstaff, the city of Belfast has long had a maritime connection.

Belfast developed around these rivers, configuring them into culverts and slipways before they become harbour then lough then sea. One of Belfast’s biggest industries, shipbuilding, began slowly in Belfast, and it wasn’t until the establishment of the Ballast Board in the 18th and 19th centuries that real progress began with the creation of Belfast Harbour. Early wooden and iron ships had been constructed by local foundries and small shipbuilders, allowing merchants to trade and the town to expand across both sides of the River Lagan. When Scottish shipbuilder William Ritchie set up his business in Belfast in 1791, it began more than two hundred years of commercial shipbuilding, with some of the biggest and most productive shipbuilders in the UK and the world. The growth of the linen industry became a catalyst for shipbuilding and other industries to expand and develop, and Belfast laid claim to the largest rope works and linen mills, industries that were all interlinked and succeeded together.

Modern Belfast retains much of this early maritime heritage, from the Clarendon dry docks to the Hamilton, Thompson & Alexandra Docks, which are now all scheduled monuments. The historic Slipways where so many huge ships were built remain, and visitors today can walk the Maritime Mile in the footsteps of the dockers and yardmen. Titanic Belfast has been constructed on the site where Belfast’s most famous ship was built over a hundred years ago, and its very design pays tribute to the huge ships once built in the gantries. The last remaining White Star line ship, the SS Nomadic, rests in the Hamilton dock where she was fitted out. 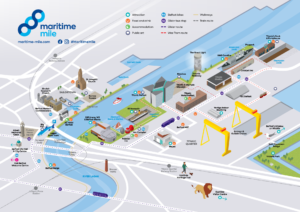 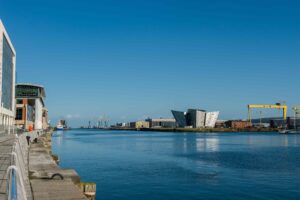 The area once dominated by shipyards is now one of Europe’s largest waterfront regeneration sites with millions of visitors every year, while the port handles millions of tonnes of cargo. This part of Belfast has embraced its maritime beginnings and clustered new attractions around the waterfront. Where once the shipyards built huge passenger liners and cargo tankers, the new industries of tourism, recreation and technology are advancing. Former shipyard warehouses have been turned into film studios or skydiving and inflatable parks. Other warehouses are now commercial operations, with everything from flour to printers to distribution services.

The maritime heritage remains however, and new developments look back to the past to reflect that.

This content was provided by the Maritime Belfast Trust – a charity established to deliver, protect and promote Belfast’s maritime heritage. www.maritimebelfast.com

The Maritime Mile is an award-winning initiative developed by Maritime Belfast Trust in association with Belfast Harbour, Odyssey Trust and Titanic Quarter Limited. It aims to connect the waterfront physically, connect with people emotionally, engaging local neighbourhoods, residents and visitors through interpretation, storytelling, events and animation. To find out more about the history of the Maritime Mile: www.maritime-mile.com